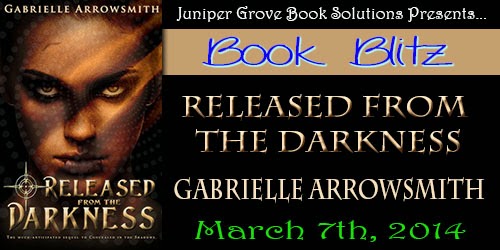 Title:  Released from the Darkness
Series:  Concealed in the Shadows, Book 2
Author:  Gabrielle Arrowsmith
Published: February 14th, 2014 by Clean Teen Publishing
Word Count:  approx. 91,600
Genre:  Dystopian
Content Warning:  Mild Violence and Romance
Recommended Age:  14+
Synopsis: Through bullet or flame, she will fight to be free.
Two young seeksmen are dead, and Sydney blames herself. The only way to get her sister back from the county’s clutches while also preventing more deaths was to offer her own life in exchange for Evvie’s freedom.
She expected a dreadful end, but nothing like the prison in which she wakes. Agonizing county life is redefined in Neo-Necropolis, new city of the dead, which lies beneath the earth. Worse than being allegedly deceased, is the false identity Sydney is forced to assume where Evvie, Sheridan’s captain, and Crewe never existed.
Sydney alone knows the magnitude of the county’s evildoings inside, outside, and now below. At only eighteen, the responsibility to defend freedom falls solely on her tried and tested shoulders – a burden that requires desperate action when a catastrophic revelation upends the world as she knew it.
The people Sydney cares for are more vulnerable than ever. Though she’s buried underground and monitored by county agents, she must escape this new captivity. Maybe it’s time to fight fire with fire. Sydney has proven her courage in facing their weapons, but can she trigger her own?
Amazon | GoodReads 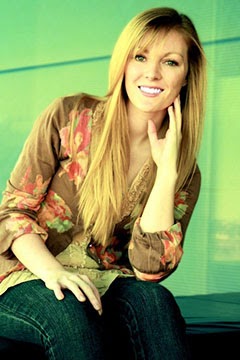 About the Author:
Gabrielle Arrowsmith was born to her loving mother, father, and older brother on August 16th, 1988. She grew up in the small town of Ham Lake, MN enjoying reading, writing, playing soccer, acting in school plays, playing piano, and adventures with her brother and cousins.
Gabrielle’s high school years were very well-rounded and challenged her time management skills. She studied diligently, enabling her to graduate near the top of her class and earn an AP Scholar with Distinction recognition for her success in college-level courses and exams. She was seen as a leader in both the National Honor Society where she was elected vice president and on her soccer and track teams which each appointed her as captain. Between soccer and track seasons, Gabrielle acted in enough school theater productions to be inducted into the Thespian Society. During her senior year, she earned the Triple A award for performance in academics, athletics, and arts.
From 2006-2009 Gabrielle attended the College of St. Scholastica in Duluth, MN where she earned a degree in Elementary Education. She played collegiate soccer for the Saints, held two work-study positions, acted in three theater productions and volunteered often. She was on the Dean’s List every semester and graduated summa cum laude.
Since 2009, Gabrielle has enjoyed teaching third through sixth graders in various school settings. She has recently transitioned to substitute teaching in order to pursue her passion for storytelling through both writing and acting. She also continues to enjoy playing and coaching soccer.
Amazon Author Page | Facebook | GoodReads 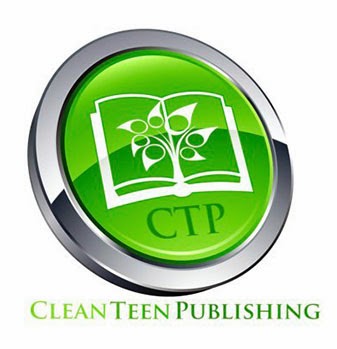 Giveaway Details:
There is a tour wide giveaway. Prizes include the following:
Giveaway is International.