Entangled Teen Giveaway and Bring Me Their Hearts Tour 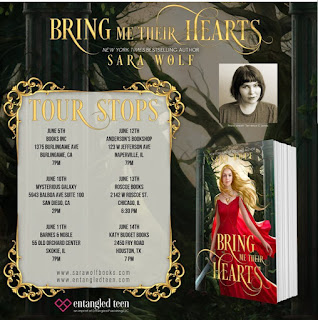 on June 5th and Sara Wolf is going ON TOUR!

We are giving away TWO Bring Me Their Hearts book boxes and 10 (yes, TEN) ARCs!

Are you ready to enter?
Here are the details:
Prizes:2 winners: Bring Me Their Hearts Book Boxes10 winners: Bring Me Their Hearts ARC
To Enter:
Share one of the Book Tour graphics below to your Instagram, Facebook, Twitter, or Blog! Use the hashtags #BringMeTheirHearts and #BMTHTour. Each account you post the image on will be considered as ONE entry. Post to all three social networks and your blog for four separate entries. As a BONUS, you can tweet the graphic once per day for more chances to WIN!
Rafflecopter link
http://m.gvwy.io/?scale=1.000&raflid=1cb554951260&template=&previous_url=http%3A%2F%2Fwww.entangledteen.com%2Fbring-me-their-hearts-tour-giveaway%2F&referrer=http%3A%2F%2Fm.gvwy.io%2F 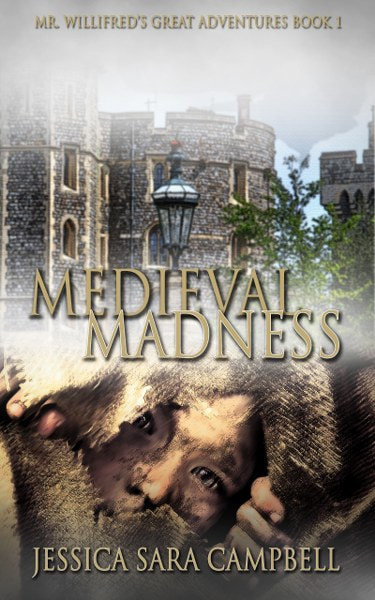 Traveling through time is not for everyone, and it's definitely not Susan and Freddy's idea of a fun ride. Their adventurous granddaughter Sylvia, though, would be happy just to do something new for a change already, anything!

Travel back in time to medieval London with the Willifred family on a heart-warming adventure of history, excitement, humor, and love. Meet the real heroes of the medieval era, some who you may not have heard about, and some you might know well! Watch history come to life in this action-packed saga.

As Sylvia discovers, medieval London may not be as glamorous as it appears in the movies, and there may even be someone up to no good behind the scenes. No one ever said old age is easy, and no one ever said being a teen is easy. Join Freddy, Susan, and Sylvia on a jam-packed ride of a lifetime, for they might find more than they are expecting in their typical weekday routine this time…

The bright light at first blinded Mr. Willifred, who stood outside blinking for
several long moments before the outside came into focus.
The sun was high in the sky and hazy, as if covered over with a thick layer of
dust―or perhaps disease and human excrement, judging from the smell. There
were only a few beggars out on the street, dressed in thick skirts and trousers that
appeared homemade and durable, yet at the same time worn and tattered.
The compact street was not asphalt cement, but a one-lane road packed with
dirt. My car couldn’t fit through here, Mr. Willifred thought to himself, shaking
his head.
“Erm, excuse me, gov’ner!” The person responsible for Mr. Willifred’s
excursion from his home broke into Freddy’s thoughts.
In front of Mr. Willifred, smiling as brightly as the dust-covered sunlight, was
clearly a homeless beggar.
It looked like neither a man nor a woman, though there was only a small
mustache present and no beard. Also, the voice was high pitched, so it must have
been a woman. This person had ruddy cheeks and small, squinted brown eyes
lined with old age. But there was kindness behind the lines and toothless grin.
Caked dirt and a putrid smell had followed this woman to his front porch.
Freddy shook his head. Such rudeness.
Wait! Freddy looked down. The front porch! There was no longer a front
porch! Freddy squinted at the ground in front of him.
Where once his cement porch had been, with the lovely porch swing and crisp
white overhang, there was only more packed dirt!
Mr. Willifred felt overwhelmed with being outside in this strange new world,
of smelling the foul odors and seeing this strange being before him, and was
having difficulties taking this all in. He pulled his shirt up to his nose, making no
effort to appear polite in the midst of such chaos, and noticed another change
instantly and frighteningly.
His clothes were different! No longer was he wearing his checkered blue-andwhite
button-up shirt, shiny slip-on brown work shoes, and tan slacks. He
appeared to be wearing a heavy wool and cotton tan shirt and cotton slacks made
rather crudely and by hand, not from a sewing machine.
“Ow are ye, kind sir?” asked the bedraggled woman in front of him. She held
something in her hand, something grey and lifeless.
Freddy shuddered and kept his ugly shirt up by his nose and mouth. “How can
I help you, mister…um…miss?”
“Ell, moi naime is Ferona, an oim the maid servan fer tha dwellin next door.
Mr. an Mrs. Voigt wanted to send ye a gift. We awl saw ye ain’t been out in days.
We wanted ter make ser ya didn’t have thar plague! Ere, we brot ye a chicken.
Thought ya might be ungry!”
The woman held up the lifeless, diseased-looking, headless grey bird. Freddy
covered his mouth to avoid gagging. He looked around quickly, scanning the
street, the houses. He glanced behind him and saw that, much as his clothes had
changed, so had the outward appearance of his house! It looked small, old, and
moldy. He took two steps backwards onto the packed dirt street, head staring up
at the mud-packed, rock-layered dwelling that used to be his house, and felt his
foot step into something squishy, then felt his back run into a person. He turned
around quickly. He had run into the smelly old woman!
“Ah!” he called out. A man on the street with a large beard looked over at him
grumpily, and a dirty looking woman carrying two sickly looking young children
frowned over at him. He heard a plop and saw a woman in an upstairs room
dumping something onto the dirt-packed street from a copper pan, something
that looked remarkably like… No! Freddy thought to himself. People wouldn’t
do something like that! Freddy was quite certain he was close to experiencing
something like a mental breakdown.
“Excuse me, kind sir.” The old woman, now standing next to him―too close
next to him―once again broke into his thoughts.
“But ya want ter be takin this ere chicken now? I got lots of work ter be doin
terday. Almost tea time. Got ter get back to the Missus and Mister.”
“Um… Yes. Certainly.” Freddy forced himself to function. “Thank you for
the…bird… We will enjoy the…nourishment…it may or may not provide.”
The woman raised her bushy eyebrow at him and grinned. “Oright then, ere ya
go!” She held out her hand with the dead bird hanging from it.
Freddy took a deep breath and grabbed hold of the thing. He knew his hand
would never again feel clean. The woman turned around and began to hobble
across the small, cramped street.
Freddy waited until she turned, then quickly opened his door, which no longer
looked like his door, just a crack, ran inside, and shut the door. Before even
looking inside, he threw the dead chicken to the floor. To his floor. Freddy
looked around, appalled. His floor looked like his floor. Clean, white, except for
the dead grey chicken. He looked down. His clothes! Back to normal! Freddy’s
head swam with unanswered questions, with a longing for his old life, with a
desire for things to just go back to normal. For his friends, his neighbors, his
office and customers, for his favorite restaurant, and his normal schedule. His
vision became blurry as he worried about taking care of Susan and Sylvia in the
midst of circumstances he had never experienced. He dimly heard Susan calling
out to him as darkness filled his vision, and Freddy Willifred slumped to the
floor, passing out in temporary relief. Sylvia and Susan ran to support him. 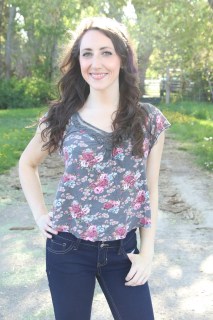 Jessica Sara Campbell was born in Florida and raised in New Hampshire and Idaho. She loves Disney, teaching, reading, writing, and animals. She has been married to the love of her life for seven years. Jessica has been writing since birth, even if it was only scribbles. Jessica has played both the violin and the piano and speaks French. Jessica has written articles for several Newspapers in Idaho, but her favorite writing took place in high school and college where true literary nerds can let their creativity flow. She loves fishing, horseback riding, and hiking just as much as swimming at the beach. This is Jessica’s first book, and it is a dream come true.

Posted by purpleshadowhunter at 2:00 AM No comments: 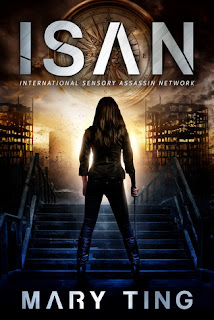 The world has changed.
Scientists warned it would happen.

Struggling to survive, seventeen-year-old Ava ends up in juvenile detention, until she is selected for a new life—with a catch. She must be injected with an experimental serum. The results will be life changing. The serum will make her better. To receive the serum Ava agrees to join a program controlled by ISAN, the International Sensory Assassin Network.

While on a mission, she is abducted by a rebel group led by Rhett and told that not only does she have a history with him, but her entire past is a lie perpetuated by ISAN to ensure her compliance. Unsure of who to trust, Ava must decide if her strangely familiar and handsome captor is her enemy or her savior—and time is running out.

Review
Best Dystopian read! I was pulled into Ava's world from page one and I couldn't put it down, I was caught up in their world and I'm still reeling with emotions! And now I desperately want book two! This book has suspense, adventure, love,lose and a range of emotions that keep you hanging on til the last word!This is a must read book! In my opinion it's the best dystopian read since Divergent and I actually think it surpasses Divergent! It is full of twist and turns that will keep you guessing and anxiously awaiting book 2! There's plenty of action to keep you turning the page til the very end and also alittle romance to spicy it up a bit. All in a dystopian sci-fi setting that is ingenious and creative!Definitely give this book 5 hearts!
❤💜❤💜❤

Mary Ting resides in Southern California with her husband and two children. She enjoys oil painting and making jewelry. Writing her first novel, Crossroads Saga, happened by chance. It was a way to grieve the death of her beloved grandmother, and inspired by a dream she once had as a young girl. When she started reading new adult novels, she fell in love with the genre. It was the reason she had to write one-Something Great. Why the pen name, M Clarke? She tours with Magic Johnson Foundation to promote literacy and her children’s chapter book-No Bullies Allowed. 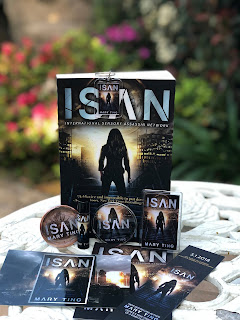 Posted by purpleshadowhunter at 12:17 AM No comments:


Follow some amazing authors on BookBub and be entered to win a $350 Amazon gift card! 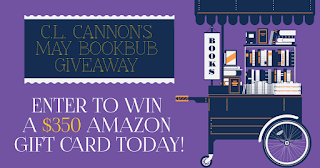 Posted by purpleshadowhunter at 10:17 PM No comments: