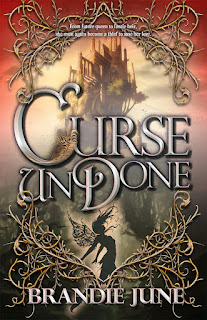 Title: Curse Undone
Author: Brandie June
Release Date: October 4, 2022
Genre(s): Fantasy Retelling
Buy Link: https://amzn.to/3FL7aUx
SYNOPSIS:
Two crowns. Two kingdoms. One chance to rule.
Nor and King Casper are captured by the fay army and forced to face the
indomitable Faerie Queen, Marasina. At her command, Casper is thrown into
a mysterious prison while an even sinister fate is in store for Nor—a deadly
fay poison that reveals Nor’s true nature. She’s not only half-fay. She is Queen
Marasina’s heir.
Revealed to be like the very creatures she despises, Nor must not only find a
way to free Casper but also navigate a court that is as deadly as it is
beautiful. Her allies are few, and though Pel claims to want friendship, Nor
finds she cannot forgive his betrayal. As tensions mount and war looms
between the kingdoms, Nor must choose a side, before it’s too late.
In this epic conclusion to the Gold Spun duology, Nor discovers that a
glamour and a curse may be two sides of the same coin.
Review:🦋🦋🦋🦋
An intriguing epic fantasy with great world building and relatable characters. I found the synopsis compelling as was the storyline! I definitely recommend this book! If you love Fay stories it is a Fay story to add to your tbr list! 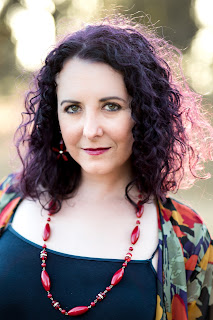 Author Info
Brandie June spent most of her childhood onstage or reading, as both
activities let her live in fantastic stories. She moved to Los Angeles to study
acting at UCLA, and eventually branched out into costume design and
playwriting. While she spends most of her free time writing, she will still take
any excuse to play dress-up, especially if it involves wearing a crown. She
happily promotes more stories as a marketing director for kids’ films and
anime. When not writing or marketing, she can often be found doing aerial
arts, playing board games, drinking too much espresso, and coming up with
new art projects. She lives with her husband, two spoiled rescue pups, a
spoiled cat, six fish tanks, and five bookshelves. You can find out more about
her at www.brandiejune.com and follow her @thebrandiejune.
Posted by purpleshadowhunter at 2:08 PM No comments: 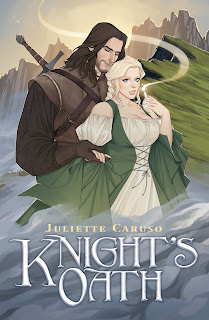 Book Info:
Knight’s Oath (Knights of Enar #1) by Juliette Caruso
Genre: New Adult Fantasy Romance
Publishing Date: August 15, 2022
Synopsis:
When 20-year-old Eliana’s father orders her to court, it is with one purpose: to save their noble, destitute family through marriage to a wealthy suitor. Eliana would much rather be studying healing and making use of her rare magical talent for medicines, but there is no escaping his command. She has eight short weeks to find a match she can stomach, or else she’ll be married off to the cruel, despicable man of her father’s choosing.
Navigating court politics is difficult for nervous Eliana, who is determined to take up as little space as possible. Worst of all, she only has eyes for the Queen’s nephew, Corin: a brooding, rugged knight who is already betrothed to another. Though he returns Eliana’s feelings, he’s as trapped by duty as she is. But even as Corin struggles against his own family’s shackles, he is driven by a singular purpose: to rid the land of the bandits terrorizing the Queen’s people.
As the outlaws circle the capital city, Corin and Eliana turn their focus and their talents towards helping the vulnerable common folk who live outside the palace walls. But the bandits have a patron who aims to spread dissent amongst the crumbling ranks of the nobility. The more lives Corin and Eliana save, the more enemies they are both making… and the closer her father’s deadline draws.
This slow-burn friends-to-lovers explores an exciting new fantasy kingdom with subtle magic, steamy encounters, and danger lurking around every bend.
Top 5 Reasons to Read Knight’s Oath
~A brooding, rugged knight
~Duty vrs Love
~Lurking Danger, Action & Adventure
~Slow-burn friends-to-lovers
~Magic
Book Links:
Goodreads: https://www.goodreads.com/book/show/61385526-knight-s-oath
Amazon: https://www.amazon.com/Knights-Oath-Juliette-Caruso/dp/B0B92L7VMD/ 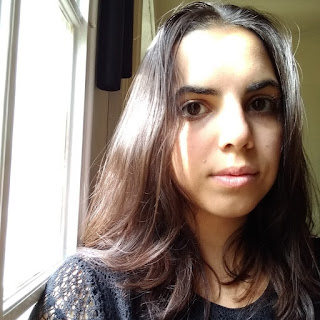 About the Author:
Juliette Caruso is a lifelong daydreamer and fantasy lover. She has a B.F.A. in creative writing and tends to overthink everything. Her hobbies include cooking, drawing, hiking, and buying books that she won’t get around to reading. She lives in a townhome with her husband, one dog, two sugar gliders, and a scraggly garden.
Author Links:
Instagram: https://www.instagram.com/juliette.caruso.author/
Goodreads: https://www.goodreads.com/author/show/22511282.Juliette_Caruso
Tour Schedule:
https://tbrandbeyondtours.com/2022/10/19/tour-schedule-knights-oath-knights-of-enar-1-by-juliette-caruso/
Posted by purpleshadowhunter at 1:00 PM No comments: