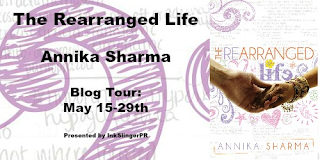 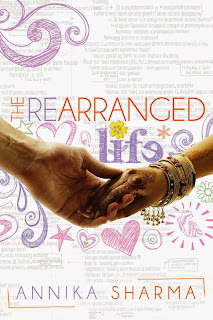 The Rearranged Life Synopsis:
Nithya, a vivacious, intelligent and driven college senior has always known what she has wanted: a successful career in medicine and the love of her family. She's even come to terms with the idea of an arranged marriage, a tradition her conservative Indian family has held up for thousands of years.
When a night of partying puts her on a collision course with danger, Nithya's entire life changes.
Enter James St. Clair, the smart, challenging and heartbreakingly handsome American.
As Nithya and James fall in love, she questions the future she and her parents have always planned. Now, Nithya has a choice to make: become a doctor and a good Indian bride, or step away from her family and centuries of culture to forge her own path.
The decision she comes to takes her on a journey that transforms how she sees her future, her relationships with loved ones, and how she learns to put herself back together when even her best-laid plans fall apart

I’m so excited to celebrate the release of The Rearranged Life with you! Thank you for having me! I’ve been scrambling my brain trying to think of something to write about for this guest post, until it hit me: there are some interesting trivia facts and knowledge pieces to this story that I thought would be fun to share. Sometimes authors know middle names or backstories but that information doesn’t make into their books. Here are an exclusive ten things you didn’t know about The Rearranged Life.

1. When I wrote the story, I didn’t realize I was going to set it at my alma mater…but I ended up using it once I realized that it’s such a bubble. Known as Happy Valley, it’s a small place and because this story has so many outside and BIG influences like Nithya’s family, India, and James’ family, I had to tuck their love story away so it could grow on its own in an isolated area, but with the issues pressing down.

3. So many things behind the names! Nithya’s full name, Nithyapriya, means “ever-pleasing”…fitting, considering the dilemma she has placed herself in and the obligation she feels. Her name is an amalgamation of her mother’s name (Priya) and her own. Priya is actually MY mom’s favorite name, so it was a tribute to her. Sophia’s last name, Bellamy, means “beautiful friend.”

5. Birthdays and zodiacs: Nithya originally began very similarly to me—now, the only real similarity is our birthdays—November 17th. She’s a Scorpio. James’ birthday is August 20th. I wanted to make him a Leo but didn’t want to give him any of my relatives’ birthdays, so the 20th was the only option. J

6. James and Nithya’s song is “All We Are” by OneRepublic…the only band they both like. Luca and Sophia’s song is “Top of the World” by Matthew Perryman Jones.

7. Pieces of these characters are based on people I know. Sophia is a mix of my two best friends in college—my former roommate and my best friend Liz. My roommate went to law school, and Liz is the most loyal person I know, a characteristic Sophia holds in great regard. Nithya is a bit like me. Tristan is very much like a friend of mine—he gives the best bear hugs ever!

8. The notes on the front of the book—the ones on the white background—are, in fact, my handwriting. They are from my biology classes, which are mentioned in the story. I took both the reproductive biology and embryology classes Nithya mentions.

9. A huge part of the book is on Indian culture—but there are so many cultures in India. For example, Nithya mentions her mother language being Telugu. There are over 250 languages spoken in India. Each state speaks a different language and does things a little bit differently. Crazy, right?

10. The Rearranged Life was originally 160,000 words—entirely too long for one book. I cut it in half before sending it to agents. What you’re reading is the first half of Nithya and James’ story. I hope, someday, you get to read the rest.
Annika Sharman Bio: 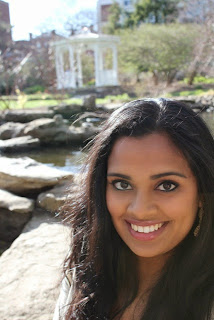 Annika Sharma was born in New Delhi and brought up in the United States, where she moved with her parents as a baby. A proud alum, she graduated from Penn State University with dual degrees in Biobehavioral Health and Neuro-Psychology, and minors in Biology and Human Development and Family Studies. She received her Master's degree in Early Childhood Special Education before pursuing her dreams of becoming a writer, landing her agent Stacey Donaghy of Donaghy Literary Group while daylighting as a preschool teacher. The Rearranged Life, her first novel, was written in the month before graduate school.
Annika, a Gryffindor and Scorpio, spends much of her time dreaming of adventure, working on her next book, going on Starbucks runs with family and friends, shopping online and watching superhero movies.
​The Rearranged Life, will be hitting shelves on May 15th, 2015, published by Curiosity Quills Press.
Rafflecopter