Song of my Abyss Blog Tour 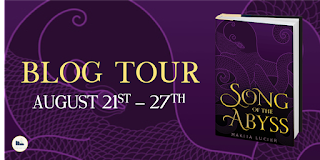 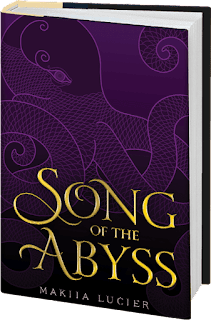 
They came in the night as she dreamt, in her berth, on a ship sailing home to del Mar. After, they would be all Reyna thought about: two carracks painted scorpion black. No emblem on either forecastle, no pennants flying above the mainmasts to hint at a kingdom of origin.


As the granddaughter of a famed navigator, seventeen-year-old Reyna has always lived life on her own terms, despite those who say a girl could never be an explorer for the royal house of St. John del Mar. She is determined to prove them wrong, and as she returns home after a year-long expedition, she knows her dream is within reach. No longer an apprentice, instead: Reyna, Master Explorer.


But when menacing raiders attack her ship, those dreams are pushed aside. Reyna's escape is both desperate and dangerous, and when next she sees her ship, a mystery rises from the deep. The sailors--her captain, her countrymen--have vanished. To find them, Reyna must use every resource at her disposal . . . including placing her trust in a handsome prince from a rival kingdom.


Together they uncover a disturbing truth. The attack was no isolated incident. Troubling signs point to a shadowy kingdom in the north, and for once, the rulers of the Sea of Magdalen agree: something must be done. But can Reyna be brave enough to find a way?
Review:
I love women sailors(well pirates 😂) after watching Pirates of the Caribbean one too many times, so reading about Reyna being a Mapmaker on a ship that was raider and the crew taken with only her life and precious maps escaped an adventure for me.Now she must make her way to nearby Kingdom whose relationship with her wasn't on the best of terms but she must get help for her friends and crewmates and she has little options. Finding help in the form of a prince from this rivaly kingdom, they must put difference aside to solve the mystery that goes deeper than they expected. Reyna is a strong character and female but is she brave enough to find a way to do what must be done to combat the enemy and save everyone?


Her debut novel, A Death-Struck Year, was called a "powerful and disturbing reading experience" by Publishers Weekly, and was a finalist for Germany's top book prize for children, the Deutscher Jugendliteraturpreis. Her second novel, Isle of Blood and Stone, was inspired by her love of Indiana Jones movies and old, old maps.


She lives with her family in North Carolina.


TOUR SCHEDULE
Please include this link on all your links:
https://fantasticflyingbookclub.blogspot.com/2019/07/tour-schedule-song-of-abyss-tower-of.html


GIVEAWAY
Prize: Win (1) of (3) finished copies of SONG OF THE ABYSS by Makiia Lucier (US Only)

Posted by purpleshadowhunter at 12:34 AM