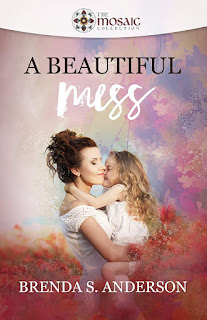 Can she love the child who broke up her marriage?Nearly four years ago, Erin Belden’s happy life became a shattered mess. After her husband admitted to an affair and that a child had been conceived, he left her and their young daughter for his new family. Now, she’s finally ready to put the pieces of her life together. She’s set to launch her own business and even thinks her heart might be open to romance—should the right man come along.But just when everything seems to be lining up, she receives a devastating call: her ex-husband and his wife have been killed in a car accident, and Erin is listed in their will as their daughter’s legal guardian.How can she be a mother to the child—let alone love the child—who broke up her marriage? Does she have the courage to start over yet again and turn this mess into a mosaic of beauty?A single mother’s journey from bitterness to forgiveness.

Review:
Where do I begin with this book? Well it is definitely a beautiful mess and I highly recommend it. I do have to say this book was way harder to read than I anticipated. For most people, it probably isn't but it hit close to home for me and brought up a lot of emotions that I still deal with the same as Erin had to deal with. A single mother raising a teenager(or for me two) who feels abandoned by her father is no easy task. Then for Erin to have to take in the child from her husband's affair after her ex and new wife die is a tremendous burden. And although she silently deals with anxiety and anger,she does take care of this little girl with grace and love.

Posted by purpleshadowhunter at 11:20 PM